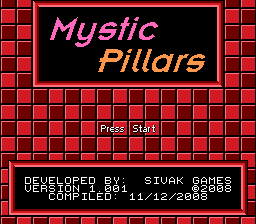 This game is a clone of the game Columns. It is the third game done by Sivak Games.

One must guide a pillar of 3 different tiles and stack them. Once 3 or more matching tiles are adjacent to each other, either horizontally, vertically, or diagonally, those tiles will be cleared and all overhead tiles will settle under gravity. If more matching happens as a result of this, then the process repeats, but with more points.

Every 35 matches will increase the level and speed at which the blocks fall. The speed caps at level 30.

Periodically, one will be granted a magic pillar which, when placed on a tile, will clear all tiles of that type from the well.

The game ends when a pillar crosses the top of the well or entry of a new pillar is impossible.