SUPER PAKPAK is a 2-4 player Spacewar!/Thrust/Gravity Force style game for the NES and Famicom.

It was programmed in a few weeks during the year 2010, and was submitted as an official entry for the Assembly Summer 2010 Game Development competition in Helsinki, Finland. It ranked 7th out of 19. 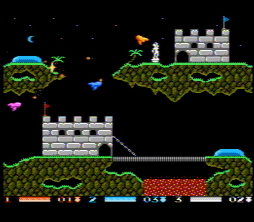 At least two players are needed to start the game. Hold button A at the start menu to begin a game. The game will begin after the counter counts to zero. In two player games, you need to get two kills in a round before the level ends. In three or four player games, the level ends when there is only one ship remaining.

During the game you can use the following keys:

The secondary weapons are the following:

You get a point by destroying another ship. If a ship gets destroyed indirectly (lava or crashing into a wall), the ship that damaged it the last time during the round will get a point. If a ship shoots itself or gets blown by an explosive in the level triggered by the ship itself, no one gets a point. There are 12 scenes in the game; after the 12th scene the game is reverted back to the first scene. After any player gets 50 points, the game ends and an end screen will appear.

You can play with a NES Four Score/NES Satellite adapter, or if you have a Famicom System, you can use regular Famicom multi-player controllers.

If you have a regular NES, and you don't have a Four Score/Satellite, it is possible to hack two more controllers into the expansion port at the bottom of the NES (this actually adds Famicom multi-player feature to your NES, which is supported by some Japanese games).

If you want to try to make one, here are the shift register bits:

A good candidate would be a microcontroller with AD and a potentiometer with the stopper inside removed, so it rotates 360 degrees. You could also implement it in pure TTL logic and use an old AD080x AD-converter!