The Game Genie is a enhancement cart for the NES designed by Camerica and distributed by Galoob and Camerica. It functions as a pass-thru, with a 72-pin cartridge connector connecting it to the NES, and a 72-pin cartridge slot for a game to be inserted into. When plugged in between a game and the NES and turned on, it provides a simple interface to enter up to three cheat codes, which then modify the behavior of the game. First revision were build using ASIC blob chip and 4 kB ROM, the latter one has both chips integrated into single epoxy blob. There even exist a console (Geniecom Enhance Console video Game) that has the Game Genie ASIC DIP CHIP (GENIECOM-V1 BIC) built it.

The Game Genie is not assigned a mapper number. 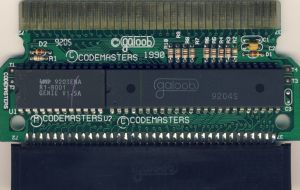 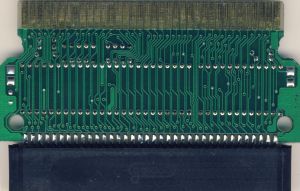 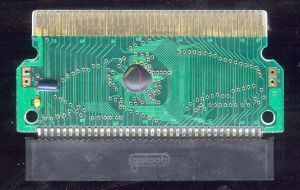 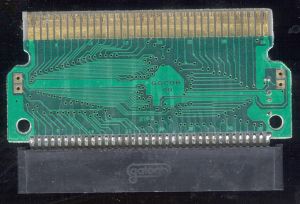 The Game Genie works by intercepting CPU reads and replacing the game cart's response with its own response. It can intercept any three addresses in CPU $8000…$FFFF and respond with a single replacement for each. To make the tool more compatible with bank-switching, each of the three codes has an optional compare value which can be used to only replace the byte if the original byte matches the compare, hopefully limiting the cheat to functioning on the desired bank.

When first booted, the Game Genie presents its own 4-KiB PRG ROM and a series of simple gates masquerading as a CHR ROM. The included PRG ROM runs code to show a simple code entry user interface. When the user presses Start, the cheat values are written to memory-mapped registers, and then another register is written which switches the Game Genie into game mode, where the attached game cart's CHR and PRG is passed through, save whatever code replacements were defined. The Game Genie remains in game mode until power-cycled, and will respond to no further writes.

Game Genie writes first a value with bit 0 set and then writes 0x00 to this register. Because after the first write, the GameGenie logic switches into game mode, any further writes to range $8000-$ffff will cause the slave cartridge /ROMSEL to become low for that write cycle. As a result, the second write will be seen and interpreted by the hardware inside slave game cartridge. The reason for this write is unknown, maybe it initializes the bank select register for MMC3 games?

When game mode is inactive, the Game Genie generates PPU pattern tables through PPU $0000…$1FFF by the following method:

This creates 16 distinct objects that are used to build the menu graphics:

Because of how the hardware is designed, there are some bugs or limitations of this device