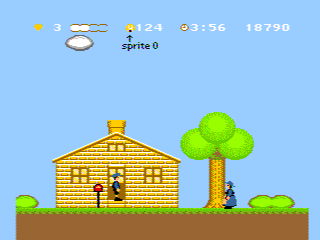 Sprite 0 hit is used to split the screen.

There are three main ways that a game loop on the NES can be organized:

But once your game world becomes more complex, the simple method may cause problems. For example, consider a video game that has a status bar and several critters running around. It may occasionally take longer than one screen to process AI, physics, and display updates once enough critters with complex movement patterns are spawned, such as multiple Hammer Brothers in Super Mario Bros. or all the turtles in the middle of World 3-7 of Super Mario Bros. 3. This will cause your game to slow down when an NMI occurs while your game is doing something else. And if your scanline counter is based on sprite 0 hit and not an IRQ, it will cause visual glitches as the status bar flickers.

So sometimes, it's useful to do more than the bare minimum in your NMI handler. To make a top status bar rock-solid in the face of excessive game logic, you can move VRAM uploads and sprite 0 handling into the NMI handler. The main program prepares VRAM updates in main RAM, and once the VRAM update request is ready, it turns on a flag VRAM_update_ready to let the NMI handler know. This is similar to multithreaded programming, but because the NMI handler itself is never interrupted, the locking can be much simpler than it is in multithreaded programming on a PC.

The NMI thread has these steps:

Make sure to do anything related to VRAM and OAM before other things like music. Vertical blanking time is valuable, and you should make the most of it.

Even though the NES CPU has only one NMI vector, ordinarily within ROM, it's possible to switch among multiple NMI handlers using a small amount of self-modifying code.