Changing palette entries in the middle of a frame on the NES is difficult, but marginally possible.

A few games are known to change palette entries for a status bar region:

Indiana Jones and the Last Crusade changes its background color many times across the title screen for a gradient sky effect: 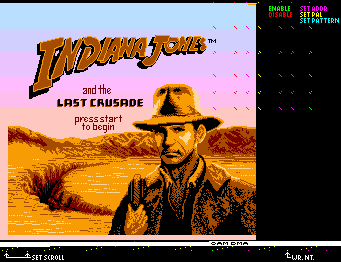 To write to the palette in the middle of the screen, the following sequence of operations need to be done:

Ideally, these should be done within or mostly within horizontal blanking to minimize the appearance of visual errors. There are several problems:

Because of these issues, it is best not to use this techniques where sprites may overlap the affected lines. Indiana Jones hides some potential visual errors by only working where the background is already blank, and only changing the background color. Games that change colors for a status bar can use blank lines at the top of the status bar to similarly avoid visual errors.

PPUADDR Pointer technique: While rendering is turned off, it may be marginally useful to point the PPUADDR to one of the 16 palette entries to have the background rendered as that colour. This can serve to create lines of colours not otherwise available; or available otherwise only available to the sprite plane. Once done, you should restore the scrolling position and nametable selection before turning rendering on again. In practice, you prepare the palettes as per normal during vblank and then have the PPU look up any palette entry as if it was the backdrop colour; mid-frame.