Note: Visual 2A03 and Visual 2C02 are hosted on a limited uplink, so please avoid e.g. shift-reloading them frequently. Normal reloading should work fine and should properly catch any updates to the data files.

Visual 2C02 is a hardware-level simulator of the NTSC PPU by Quietust, using the same core as the Visual 6502 project. It can be used to figure out exactly how the PPU operates under various circumstances.

This page covers the basic user interface and tracing functionality. For making sense of the circuit display, see this tutorial. 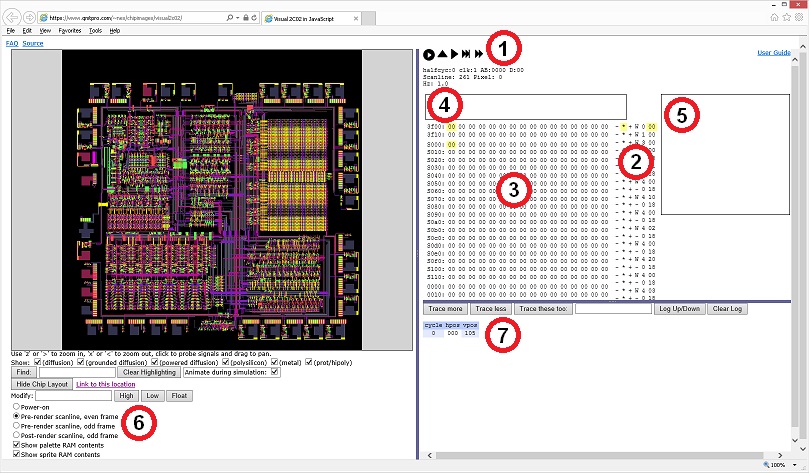 The controls in this section start, stop, and reset the simulation. The Scanline: and Pixel: status displays are based on internal PPU counters and should be self-explanatory (see this timing diagram for what operation is carried out at each dot). The starting state to use when resetting the simulation can be selected with the radio buttons in section 6.

This is a list of register accesses to be carried out, going in sequence from top to bottom. (The simulated 2C02 isn't attached to any other simulated devices.)

For example, W 1 1e decodes as write $1E to $2001. Reads are included as they can be significant for some registers - in this case, the "value" column will be filled in with whatever was read from the register.

Register accesses can be removed by clicking on the '-' and added by clicking on the '+'. A '-' in the R/W column indicates a delay (use the numpad to input the '-'), where e.g. 1 23 as the numeric values means 0x123 master half-cycles. The '*' shows the current access, and can be clicked to jump to that point in the sequence.

Memory display. Can also be used to modify memory.

Select a byte of memory by clicking on it, then type the desired new value in hexadecimal. You can use the arrow keys to navigate to adjacent cells.

Video output waveform display, based on the vid_ node. You will at least see some level changes and squiggly stuff here near the end of each scanline, which is the NTSC hsync and colorburst.

This contains the picture being rendered by the 2C02, done by extracting the pixel values being fed into the NTSC luma/chroma generators and drawing them using the PlayChoice-10 RGB palette (with extra grays added in column 0xD). Note that this does not yet simulate color emphasis.

Pretty self-explanatory. Node numbers or node names (e.g. "spr0_hit") can be entered in the Find: edit box to locate them in the diagram.

If you want to manipulate an external pin, you can enter its node ID in the "Modify" box (or simply click on it) and press the "High"/"Low"/"Float" buttons to the right. Using this with internal nodes is not recommended, since it may result in unexpected behavior as the High/Low states will persist until you select them and choose "Float" (except for nodes connected to power sources, which must be set to "High" in order to function correctly).

Tracing of node values. Additional nodes to trace can be added in the Trace these too: edit box, separated by either spaces or commas (e.g. "spr0_hit tile_l vid_" or "spr0_hit,tile_l,vid_").

The cycle column is based on the master clock, which the PPU divides by four. Each line in the trace corresponds to a half-cycle, so there are 4*2 = 8 lines per PPU tick.

A list of nodes can be found in https://www.qmtpro.com/~nes/chipimages/visual2c02/nodenames.js . For nodes that have many bits, e.g. finex0, finex1, finex2, you can trace all of them at once by using "finex" as the node name.

Turning off tracing and unticking Animate during simulation and Show sprite RAM contents can massively speed up the simulation.

(Since the nametables are initialized to 0 by default, this is the tile that will be used for all the background tiles by default.)

2. Change the value at 3F01, which is the BG palette entry that will be used. 20 seems to work fine.

3. Run the simulation (and note the Performance section). The first line is the pre-render line, so nothing will be seen here. At scanline 1, you should see some pixels being output in the waveform display corresponding to the 81 pattern.

Some things to look out for