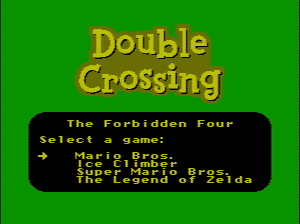 Double Crossing: The Forbidden Four is a multicart engine based on The Legend of Zelda and designed to accommodate the four hardest-to-obtain NES games in Animal Crossing.

Animal Crossing, a social simulator for Nintendo GameCube, included NES consoles with built-in games as collectible furniture items. The player could play these games through AC's built-in emulator. There were several ways to receive games:

The forbidden games are Mario Bros., Ice Climber, Super Mario Bros., and The Legend of Zelda. The code for Tom Nook's store is specifically designed to reject universal codes that refer to the ID numbers of these games.[1]

Animal Crossing: Wild World didn't have NES games because it was too soon after the release of Famicom Mini/Classic NES Series. Later games on Nintendo platforms (City Folk and New Leaf) didn't have NES games because they would compete with Virtual Console games from Wii Shop Channel. Pocket Camp runs on hardware whose input device differs too much from that of the NES.

* None of them from the developer of Battletoads

Forbidden Four is a multicart engine that can take any four NES ROMs that fit the following criteria:

Two further restrictions: The NROM code must not write to ROM $8000-$9FFF or $E000-$FFFF, as this will trigger an unexpected bankswitch on the MMC1 and probably crash the game. The NROM-128 games also must not depend on values read from the ROM mirror at $8000-$BFFF because this ROM mirror does not exist in the multicart.

This SNROM has 256 KiB of PRG ROM, 8 KiB of CHR RAM, and 8 KiB of battery-backed PRG RAM. The ROM of any MMC1 based game is divided into 16 KiB banks. There are sixteen such banks in Forbidden Four:

The last bank of LoZ PRG is duplicated because the game expects to find it in both bank 7 and the MMC1's fixed bank.

The first 256 bytes of Menu contain

The four entries in the jump table specify which CHR page to load, which PRG page to load, how to set up the memory mapping and the mirroring, and where to put the program counter.

From the mapper init code of LoZ:

So in order to intercept Zelda's boot sequence, we need to change the start bank and start address to point to our boot sequence at $8020, and make sure it ends up at ctrl=$0F bank=$07 PC=$E440 by the time Zelda starts.

This passes control to the first 256 bytes of Menu, which sets up CPU RAM and starts the menu using a mechanism similar to the jump table. This is done because the first 256 bytes of Menu are designed to run from $8000-$80FF, so that LoZ can pass control to it, while the rest of Menu runs from $C100-$FFFF, so that it can take over the vertical blank NMI for display timing.

If you are building this on top of an SNROM base game other than LoZ, you will need to change the addresses a bit in buildf4.c and then use GCC to rebuild buildf4.exe. If you have a patch to buildf4.c to support hooking other 1 Mbit SNROM games' init code, talk about it.