There are two types of mirroring on the NES:

Memory mirroring refers to the appearance of memory or I/O registers at more than one range of addresses, with the same byte being accessible at more than one address. This occurs when the full address isn't completely decoded, that is, when a chip ignores one or more address lines. Because completely decoding an address usually takes a lot more pins on a chip, incomplete decoding is used to reduce the hardware required; if the mirror occupies otherwise unused address space, it poses no problems.

Within the NES, many things are mirrored: 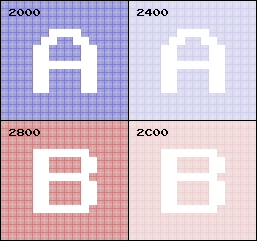 A vertical arrangement of the nametables results in horizontal mirroring, which makes a 32x60 tilemap.

This is most commonly used for games which only scroll vertically or in all directions.

Doing any horizontal scrolling using horizontal mirroring is hard to do smoothly because the data on the right of the screen is immediately show on the left due to mirroring. Clever use of hardware left-side screen clipping will hide all name table glitches, but because the attribute tables have a resolution of 2x2 tiles, there will always be attribute glitches on the left and/or the right side of the screen. The best possible way to hide it is to have 4 pixels with potentially wrong attributes on both sides, but most commercial games did worse than that having usually 8 or even more glitchy pixels, so that is why so many NES games have color glitches on the border of the screen.

Some televisions overscan up to 8 pixels on both left and right border, but most doesn't. Perfectionist programmers could use solid black sprites on the right border to hide attribute glitches and make the screen look symmetrical and hide absolutely all attribute glitches, as in the game Alfred Chicken, but very few games do this because it reduces the number of sprites per scanline to 7 and wastes a lot of OAM space (roughly 1/4 in 8x16 pixel sprite mode).

To configure a cartridge board for horizontal mirroring, connect PPU A11 to CIRAM A10. On cartridge boards made by Nintendo, this is selected by shorting the "V" solder pad (for "vertical arrangement"). 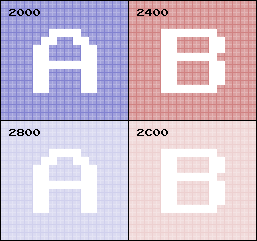 A horizontal arrangement of the nametables results in vertical mirroring, which makes a 64x30 tilemap.

This is most commonly used for games which only scroll horizontally. Games that scroll vertically (by any amount and without status bar) and that never scroll horizontally by more than one screen would use this mirroring (e.g. Lode Runner, Bomberman, Fire Emblem, Crystal Mines), so that they don't have to load anything when scrolling horizontally.

Of course it is also used for games which scroll in both directions without a status bar. Because data that is on the top/bottom of the screen will immediately show up on the other side, a clever use of NTSC overscan can make it glitch-less multidirectional scrolling, but glitches will appear on PAL televisions (and NTSC televisions with a overscan range which is a little off). The best possible way to hide glitches is to make 4 pixels with wrong tiles and 4 additional pixels with wrong color on both sides, but most commercial games did much worse than this, that's why they look so bad if overscan is disabled.

Perfectionist programmers could use raster split to hide glitches (and possibly also provide more blanking time to update VRAM) as in the games Jurassic Park and M.C. Kids, but it was rarely done because it complicates the code a lot for little benefits.

To configure a cartridge board for vertical mirroring, connect PPU A10 to CIRAM A10. On cartridge boards made by Nintendo, this is selected by shorting the "H" solder pad (for "horizontal arrangement"). 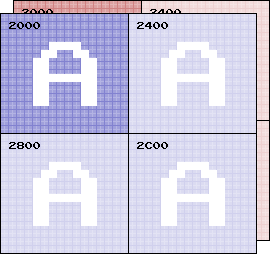 Single-screen mirroring is only available with certain mappers, such as the AxROM, SxROM, and TLSROM boards, resulting in two 32x30 tilemaps.

Its main advantage is that it allows using a status bar at the top or bottom of the screen while also allowing the playfield to extend equally in any direction - this can be done by storing the status bar in one nametable, rendering the playfield in the other nametable, and switching mirroring (and scrolling parameters) at the appropriate screen location during rendering.

There are also a lot of other things that can be drastically simplified when using 1-screen mirroring: The formulas used to calculate PPU address of data to be updated to the screen are also significantly simpler, and if the status bar have a variable size or is scrolling, all this would be a headache without 1-screen mirroring.

When this mirroring is used to scroll horizontally, similar glitches and scrolling problems that those of horizontal mirroring will happen. However, as long as there is a status bar, no glitches will happen vertically since the data that falls off the bottom (or the top) of the screen will come in the area that is "hidden" by the status bar, regardless of overscan factors.

There are several different ways to configure a cartridge board for single-screen mirroring. Some boards have single screen mirroring which is mapper controlled like the MMC1 and AxROM. For AxROM connect the output of a register (e.g. 74HC161) to CIRAM A10 (AxROM latches PRG D4). A simpler way to create one screen mirroring that's fixed (non-changable by software) is to simply connect CIRAM A10 to Gnd or Vcc. The board that implements iNES Mapper 218 wires CIRAM A10 to PPU A10, A11, A12, or A13, so that the game can store tiles in CIRAM without having any CHR ROM or CHR RAM in the cartridge. 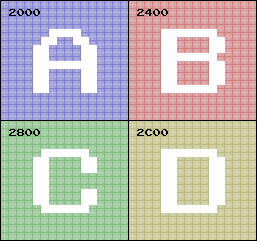 With additional RAM and/or PPU address mapping present on the cartridge, 4 unique nametables can be addressed through the PPU bus, creating a 64x60 tilemap, allowing for more flexible screen layouts. Very few games made use of this lack of mirroring.

Mappers known to be used with 4 screens of nametables:

The iNES format can specify 4 nametables in the header, allowing 4-screen RAM nametables to be applied to any mapper that doesn't structurally conflict with this (if supported by the emulator).

There are several ways to implement extra nametable RAM on a cartridge board:

Diagonal mirroring (CIRAM A10 = PA11 XOR PA10) would facilitate changes in scrolling direction without having to flip between Horizontal and Vertical mirroring.

L-shaped mirroring (CIRAM A10 = PA11 OR PA10), seen in Sachen's 374N and 8259 family, allows scrolling in four directions as long as scrolling changes directions only at screen boundaries.

This table lists the more simple and easy to understand mirroring and scrolling techniques. There are a huge variety of more complicated techniques. For a more comprehensive survey, see: List of games by mirroring technique

The best way to understand the mirroring techniques used in a game, use a debugging emulator to look at the nametables. Status bars typically require a scrolling split at a timed location on the screen. This can be done most easily with a mapper based IRQ, but can also be accomplished with a sprite-0 hit or other techniques.