In television, overscan occurs when a video monitor draws the picture slightly larger than the screen, with some of the picture hidden by the border. Consumer TV monitors are generally configured with some amount of overscan to accommodate component tolerances in CRTs.[1](Overscan) Broadcasting standards generally prescribe a safe area, or part of the picture unlikely to be covered by overscan. This often consists of a minimum visible area, the title safe area, and a maximum, called the action safe area. For example, the BBC recommends keeping a 5 percent margin inside the screen and putting all important information, such as text, within the center 90 percent of the width and height of the screen.[2]

The NES PPU always generates a 256x240 pixel picture. But not all of these pixels are visible on an NTSC TV, especially the top and bottom few scanlines. Because very few NTSC TVs display much if any of the picture outside the center 256x224 pixels, games can treat this area as an action safe area and arrange their video memory updates to keep glitches caused by nametable mirroring or use of "negative" Y scroll[1] outside this action safe area. In addition, to accommodate TVs with larger overscan, they keep important information 16 pixels inside that, forming a 224x192 pixel title safe area.

BT.601 (formerly CCIR 601) is a standard for digital processing of component video signals, describing a way to sample NTSC video at exactly 13.5 MHz with 720 samples per line.[2] The convention is that the center 704 samples of this represent picture information within the 4:3 frame, for 704x480 non-square pixels. (The extra pixels at the sides are nominal analog blanking, to capture signals slightly before and after the clean aperture in case of a sync shift, allowing the signal to be recentered before broadcast.) Equivalently, one could sample at 135/11 MHz to produce 640x480 square pixels in the "clean aperture".[3] This means the signal associated with one scanline is 640/(135/11) μs = 704/13.5 μs ≈ 52.148 microseconds long.

The NTSC color subcarrier is defined as 227.5/286 times the 4.5 MHz audio subcarrier, or 39,375,000/11 Hz = 315/88 MHz ≈ 3.5795 MHz. The NES master clock is always 6 times the color subcarrier frequency because there are 12 hues on the NES PPU, and the color generator generates hues with a set of ring counters clocked on the rising and falling edges of the master clock. So the PPU's pixel rate is 1/4 of the master clock, or 6/4 of the color subcarrier, or 315/88*6/4 ≈ 5.3693 million pixels per second. (This pixel rate appears to have originated in the TMS9918 VDP used in the ColecoVision. The NTSC Sega Master System VDP and Super NES PPU use this same rate, as does the Sega Genesis VDP in the 256-pixel mode that several multiplatform titles used.)

For a 280x240 pixel picture, the 90 percent safe area is 252x216 pixels. Some CRT TVs have rounded corners; it's a good idea to keep text away from the corners if possible.

This, however, doesn't give developers a free pass to ignore glitches caused by background mirroring. Actual TVs show about 224 lines of the signal, hence the commonly reported 256x224 resolution. But the vertical position may be slightly off center. Emulators and LCD HDTVs tend to use lines 8 to 231, but some TVs have been seen to show lines 12 to 235. In fact, even some CRT SDTVs made in the 2000s show more of the bottom than the top; this may be so that tickers on cable news channels aren't cut off.

As seen in an interview with the Zelda team, Nintendo's official background planning sheets had a conservative 224x192 pixel title safe area, covering 80% of the width and height of the overall picture. It reserved 24 lines at the top and bottom and 16 pixels at the left and right as potential overscan. Later in the NES's commercial life, as TVs became manufactured to tighter tolerances, some developers pushed this out farther. The scaled mode of PocketNES, an NES emulator for Game Boy Advance, has 8 pixels of overscan on the left and right, 16 on the top, and 11 on the bottom. If all your graphics are visible in PocketNES, they should be visible on TVs made since the 1980s. 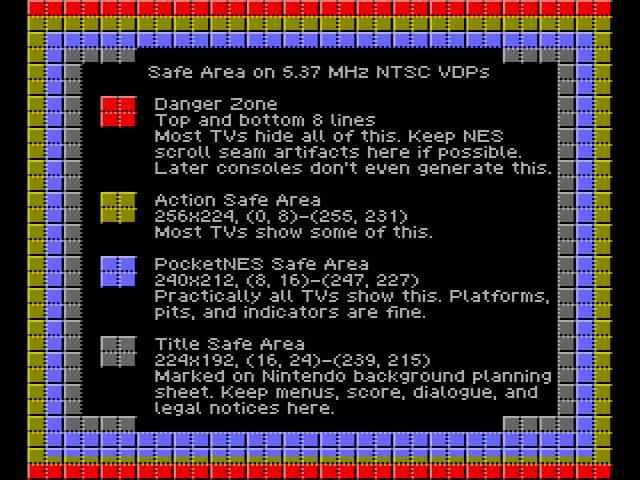 Diagram of action, PocketNES, and title safe areas within the 4:3 frame. (Transcript behind link)

You can preview a game's overscan compliance by pasting a border template image over a 256x224-pixel screenshot from an emulator:

Since 2007, most new TVs have been 16:9. To prepare your game for zoomed-in mode, assume a 160-line safe area surrounded by an overscan of 40 lines on the top and bottom.

Here are some numbers of overscan lines from actual TVs, determined using a homebrew paint program on an NTSC NES + PowerPak. Ranges denote fewer hidden lines at top and bottom center (x = 120-135) than at the corners (x = 16-31 and 223-239) due to CRT curvature.

The width of the picture is nearly the same as on NTSC, so we need not reconsider horizontal placement. The border is always black, and it extends into the leftmost and rightmost 2 pixels[5] and the top scanline, the one that never shows sprites.[6] However, the total picture is 288 lines tall, making the safe area roughly 260 lines tall. This means every TV shows blank bars at the top and bottom of the 240-line active area that the NES generates. So for a PAL-only title, the developer need not concern himself with TVs cutting off the status bar, but minimizing artifacts caused by nametable mirroring and sprite pop-on at the top becomes paramount. Both the PAL NES and PAL famiclones (such as Dendy) behave this way.[7]