Unlike many other game consoles, the NES does not generate RGB or YUV and then encode that to composite. Instead, it generates NTSC video directly in the composite domain, which leads to interesting artifacts. 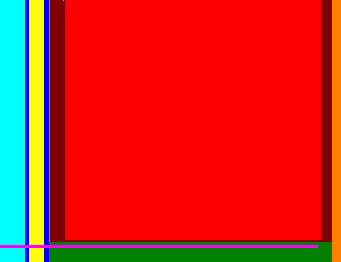 A visualization of the tables to the left, starts with Cyan for short sync

This amounts to a total of 262 scanlines.

In standard NTSC, a scanline is 227.5 subcarrier cycles long (equivalent to 341.25 NES pixels), and each field alternates between being 262 or 263 lines tall. In "short" fields, the vertical sync pulse begins on horizontal sync, whereas in "long" fields it begins half a scanline later to make the TV draw the next field one half scanline higher, resulting in interlaced video.

The video timing in the NES (and most other pre-Dreamcast consoles), however, is non-standard - these consoles produce the same number of scanlines in every field and do not vary the timing of the vertical sync pulse. This causes the TV to draw the fields on top of each other, resulting in a non-standard low-definition "progressive" or "double struck" video mode sometimes called 240p.

Some high-definition displays and upscalers cannot handle 240p video, instead introducing artifacts that make the video appear as if it were interlaced. Artemio Urbina's 240p test suite, which has been ported to NES by Damian Yerrick, contains a set of test patterns to diagnose problems with decoding 240p composite video.

Note that emulators usually crop the top and bottom 8 lines from the picture, as most televisions will hide at least part of the picture in a similar way. See: Overscan

When grayscale is active, all colors between $x1-$xD are treated as $x0. Notably this behavior extends to the first pixel of the border color, which acts as a sync pulse on every visible scanline.

Voltage levels used by the PPU are as follows - absolute, relative to synch, and normalized between black level and white:

These levels don't quite match the standard levels. Ideally, the composite signal is 1000 millivolts from peak to peak (1.0 Vp-p) when loaded with a 75 Ω output impedance. (Unloaded levels may be twice that amount, which may explain the levels seen above.) Levels are commonly measured in units called IRE.[1][2]

The following measurements by lidnariq into a properly terminated (75 Ω) TV have about 10 mV of noise and 4 mV of quantization error, which implies an error of ±2 IRE:

Unlike PAL, US NTSC is supposed to have a "setup", a difference between blanking and black level. Japanese NTSC does not make this distinction.

The color generator is clocked by the rising and falling edges of the ~21.48 MHz clock, resulting in an effective ~42.95 MHz clock rate. There are 12 color square waves, spaced at regular phases. Each runs at the ~3.58 MHz colorburst rate. On NTSC, color $xY uses the wave shown in row Y from the table. NTSC color burst (pure shade -U) uses color phase 8 (with voltages listed above); PAL color burst is believed to alternate between 6 (-U+V) and 9 (-U-V), so hue is rotated by 15° from NTSC. PAL alternates the broadcast sign of the V component, so on PAL every odd scanline will use the appropriate opposite phase—e.g. phases 5-C are respectively replaced with C-5.

There are three color modulation channels controlled by the top three bits of $2001. Each channel uses one of the color square waves (see above diagram) and enables attenuation of the video signal when the color square wave is high. A single attenuator is shared by all channels. It is active for 6 out of 12 half-clocks if one bit is set, 10 half-clocks if two bits are set, or all 12 if all three bits are set.

When signal attenuation is enabled by one or more of the channels and the current pixel is a color other than $xE/$xF (black), the signal is attenuated as follows (calculations given for both relative and absolute values as shown in the voltage table above):

Note that on the Dendy and PAL NES, the green and red bits swap meaning.

Tests performed on NTSC NES show that emphasis does not affect the black colours in columns $E or $F, but it does affect all other columns, including the blacks and greys in column $D.

This waveform steps through various grays and then stops on a color.

The PPU's shortcut method of NTSC modulation often produces artifacts in which vertical lines appear slightly ragged, as the chroma spills over into luma. 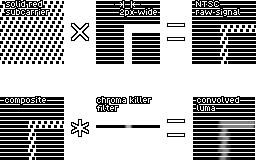 Generation and demodulation of a red corner

For efficient, ready to use implementations, see Libraries below. The following is an illustrative example:

Calculating the momentary NTSC signal level can be done as follows in C++:

The process of generating NTSC signal for a single pixel can be simulated with the following C++ code:

It is important to note that while the NES only generates eight (8) samples of NTSC signal per pixel, the wavelength for chroma is 12 samples long. This means that the colors of adjacent pixels get mandatorily mixed up to some degree. For the same reason, narrow black&white details can be interpreted as colors.

Because the scanline length is uneven (341*8 is not an even multiple of 12), the color mixing shifts a little each scanline. This appears visually as a sawtooth effect at the edges of colors at high resolution. The sawtooth cycles every 3 scanlines.

Because also the frame length is uneven (neither 262*341*8 nor (262*341-1)*8 is an even multiple of 12), the color mixing also changes a little every frame. When rendering is normally enabled, the screen is alternatingly 89342 and 89341 cycles long. The combination of these (89342+89341)*8 is an even multiple of 12, which means that the artifact pattern cycles every 2 frames. The pattern of cycling can be changed by disabling rendering during the end of the pre-render scanline; it forces the screen length to 89342 cycles, even if would be 89341 otherwise.

The process of decoding NTSC signal (convert it into RGB) is subject to a lot of study, and there are many patents and different techniques for it. A simple method suitable for emulation is covered below. It is not accurate, because in reality the chroma is blurred much more than is done here (the region of signal sampled for I and Q is wider than 12 samples), and the filter used here is a simple box FIR filter rather than an IIR filter, but it already produces a quite authentic looking picture. In addition, the border region (total of 26 pixels of background color around the 256-pixel scanline) is not sampled.

The YIQ colors can be converted into sRGB colors with the following formula, using the FCC-sanctioned YIQ-to-RGB conversion matrix. This produces a value that can be saved to e.g. framebuffer:

The source code of the program that generated both images can be read at [1]. Note that even though the image resembles the well-known Philips PM5544 test card, it is not the same; the exact same colors could not be reproduced with NES colors. In addition, some parts were changed to better test NES features. For example, the backgrounds for the "station ID" regions (the black rectangles at the top and at the bottom inside the circle) are generated using the various blacks within the NES palette.

Later, Bisqwit made a generic integer-based decoder in C++. This takes a signal at 12 times color burst and can be used to emulate other systems that use shortcuts when generating NTSC video, such as Apple II (where every color in HGR is an artifact color) and Atari 7800 (whose game Tower Toppler seriously exploits artifact colors).