The Everdrive N8 is a Flash Cartridge made by Krikzz. It uses an FPGA to emulate a wide variety of mappers, allowing the user to store a large collection of ROMs on a single SD card and run them on an NES or Famicom.

In addition to NES ROMs, the Everdrive N8 is able to play FDS disk images.

Famicom expansion audio is supported, and on the NES version is output on the EXP 6 expansion pin on the cartridge connector as used by the PowerPak. A simple modification to the NES allows the expansion audio to be mixed with its output. 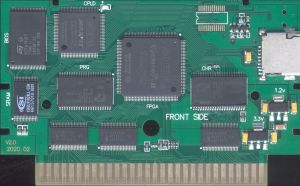 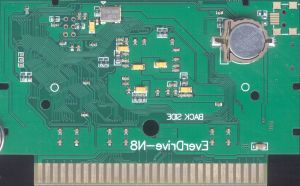 The software part consist of:

A few mappers have been created by others to supplement the Everdrive's provided set, but have since been integrated into or replaced by official mappers:

Aside from mapper incompatibility, there are minor differences between running NES programs on the Everdrive versus a traditional single-game cartridge.